Raid Over Moscow is an Access Software game released in Europe in 1984 for Commodore 64 and other microcomputers in 1985-1986.

Released during the Cold War era, Raid Over Moscow is an action game in which the player (an American space pilot) must stop three Soviet nuclear attacks on North America, subsequently make his way and destroy a nuclear facility located in the Kremlin.

According to the game’s plot, the United States is unable to respond directly to the attack due to the dismantling of its nuclear arsenal.

The game proved popular in Finland because of its political content.

A leftist member of the Finnish parliament carried out a parliamentary questioning that it was acceptable to market a game that could have irritated a country like the Soviet Union.

The resulting debate and publicity made the game (as often happens) a best seller. 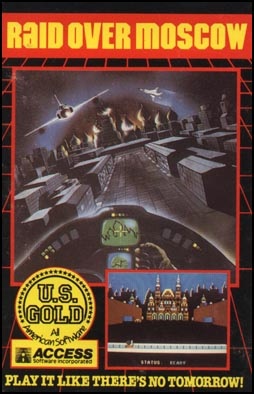