Mace: The Dark Age is a game developed by Atari Games in 1997.

It is a 3D fighting game with a dark fantasy setting.

Players can choose from 18 characters equipped with swords, daggers, maces, katanas and other weapons. The basic moves include a quick and strong attack with weapons, kicks, side jumps and throws.

Additional attachments can be performed by pressing the standard attachment buttons or by combining them with the directional buttons. Counterattacks are also possible, but require more complicated button combinations and excellent timing.

Battle arenas have multiple levels and usually contain hazards such as acid pools or swinging axes that deal damage when touched.

Some arenas include objects that can be interacted with such as pots or torches that can be thrown at opponents.

The game is gory enough for the particularly brutal ways in which you can kill an opponent. 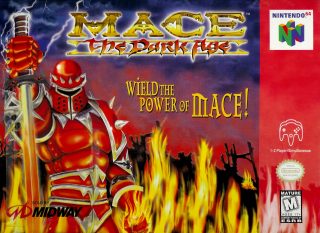