The world is veiled in darkness. Winds don’t blow, the seas are stormy, and the earth rots.

Final Fantasy is played with an adventuring party rather than with a single character.

In the game, the party walks around in a top-down world, visits cities, caves, palaces and other places to buy equipment, rest and get hints and new quests, and fights baddies when they are encountered.

Final Fantasy uses a turn-based combat system. In battle, the player gives each character in order a command (attack a particular enemy, cast a spell, use an item, or try to run). Then the characters and the enemies act in a random order.

Attacked enemies and party members lose hit points, dying when they reach zero HP. When all the enemies are defeated, living party members receive experience, eventually gaining a level and improving their stats when enough experience is accumulated. Slain party members can be revived in towns for a price. 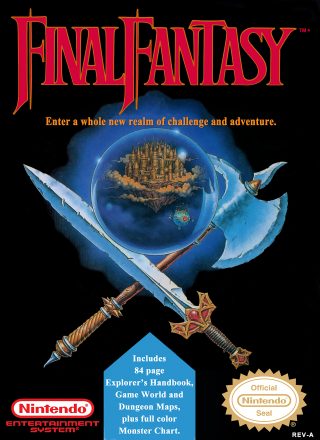