Falcon Patrol is a game produced by Virgin Games in 1983.

It is a side scrolling shooter, with the ability to move in two directions.

Players pilot a jet through a proposed looped area and must shoot down enemy planes that attack.

A small radar at the bottom of the screen shows the location of the enemies.

Fuel and rockets are limited, but there are several landing platforms where the jet can be refueled with weapons and fuel. However, before the jet can land, it must be stopped completely above the platform, making it vulnerable to attack.

Landing platforms can also be destroyed if they are bombed or if enemy planes crash into them.

As the game progresses, the enemies attack with waves of increasingly large and difficult to counter. 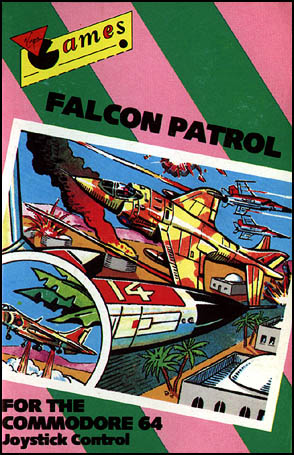 Andromeda Conquest is a game developed by Microcomputer Games in 1982. It is a strategy and conqu ...