Game developed and published by Philips in 1983

In Blobbers, the player controls a laser unit that tries to defend itself against Blobbers, giant creatures that devour everything they encounter.

A Blobber was born as a harmless small yellow spot that grows to become a larger and more purple mass, subsequently to a larger and white one until it reaches its red adult form.

Only when it is red can it damage the mobile laser unit.

Over time an adult Blobber will multiply releasing a new small yellow spot which will eventually turn into another adult Blobber.

When Blobbers are hit, they are reduced to the immediately preceding stage of development (from red to white, then purple, yellow, then eliminated).

In the middle of the screen, moving blocks called Magic Transporters move randomly up and down. 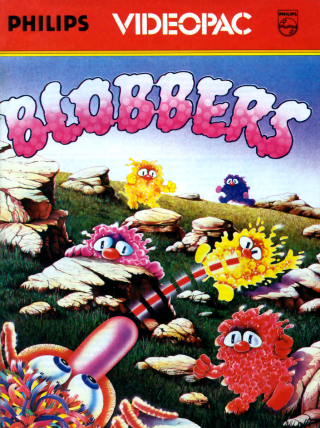