Big Trouble In Little China is a game developed by Focus Creative Enterprises in 1987.

In this game based on the John Carpenter film, starring Kurt Russell, the player must thwart Lo Pan’s evil plans, who kidnapped two green-eyed girls to marry them and sacrifice them to become mortal again.

The choice is between 3 characters: Jack Burton, a robust but somewhat stupid action hero who fights with his fists and a “Bushmaster” pistol. Ammunition must be found for the weapon to be used.

Wang Chi, whose girlfriend has been kidnapped, uses martial arts and a sword the moment she is found.

Egg Shen, a wizard who has promised to prevent the ancient prophecy from occurring and fight with magical powers that can turn into something even more powerful in the event that potions are found.

Each character has an energy status bar at the bottom of the screen represented by a slowly disappearing Yin and Yang symbol, but that energy can be replenished by finding food.

A symbol representing weapons is shown if the character has them and the magic potion symbol will give them extra strength if found.

You must alternate between the 3 characters to avoid that the health level drops too low and they can die.

Everyone can move back and forth, jump, lower and attack at different heights. They have to fight through different levels, including the streets of Chinatown, where martial arts enemies and gunmen await, who must be avoided until the experience increases.

Further on, in the sewers, there are other monsters that must be avoided by jumping over them.

Subsequently we arrive at the rooms of the underground hideout of Lo Pan, where the enemies called Storms are faced.

The final battle takes place in the wedding chamber where the armored warriors and the levitating Lo Pan must be defeated to free the kidnapped girls. 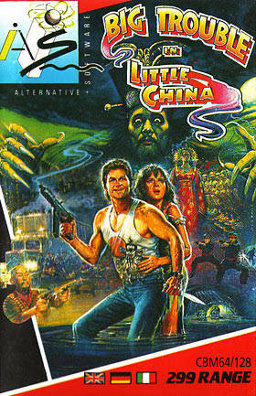 8 Eyes chronicles the adventures of Orin, the falconer, who must visit 8 different houses in 8 diffe ...