Batman Beyond: Return Of The Joker was developed by Kemco and distributed by Ubi Soft in 2000.

It is a beat ’em up game in which the player, playing the role of Batman, moves through side scrolling levels, but with the particularity of possessing a certain degree of depth in order to allow three-dimensional movement.

The select player has the option to select various game types and switch between them.

Each typology has its own skills.

Standard: mixes offensive force and shielding uniformly. The Standard Suit has three weapons: Dark Knight Discus which are launched as bullets and require ammunition; Magnetic nunchuku which can be charged and attacks in a short line; Dark knight attacking in a circular area.

Offense: capable of stronger attacks but is more fragile. The Offense Suit allows the player to open the gray chests, ensuring access to extra items and some extra areas.

Defense: Offers weaker attacks but better protects the player from damage. The Defense Suit has two shields that can be used to deflect almost all enemy attacks. A special technique called Shield Punch allows the player to deal serious damage to enemies. 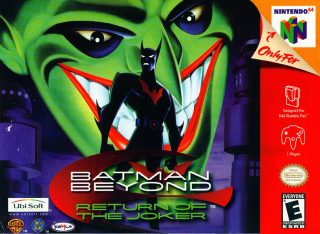 James Bond is a MI5 agent that employs gadgets and gunplay, with each mission requiring the player t ...