Attack of the 50ft Robot! is a game developed by Uphill Games in 2009.

It is an action game with a setting based on the B-Movies of the 50s.

The player takes on the role of a 50-foot robot whose only goal is to destroy everything on his way.

The game was developed by the students of the DigiPen Institute of Technology for a period of fifteen months.

There are three modes: Feature film – short level with increasing tension and huge boss in the finale. Endless reel – infinite mode with the aim of beating the maximum score. Long tutorial.

The tools to be able to practice the intent of destruction are varied: hand grenade, laser for the eyes, rocket launchers and bare hands capable of collecting anything and throwing it at the enemy. 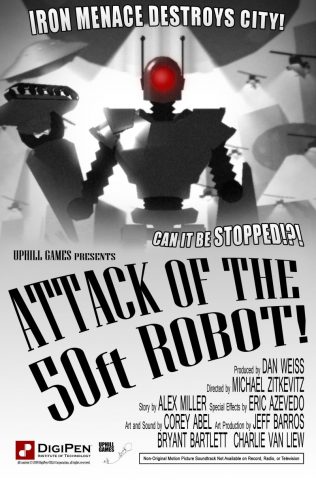