Andromeda Conquest is a game developed by Microcomputer Games in 1982.

It is a strategy and conquest game in which one to four players build galactic empires by establishing and defending space colonies, managing resources and fighting other players to control star systems.

Before each turn, players receive resources from all their colonies.

Resources must be consumed during the turn, otherwise they will be lost.

Depending on the number of players the galaxy is made up of star systems ranging from 12 to 48.

The layout is based on a grid and the package includes a block of graph paper to keep track of the positions of ships and colonies. 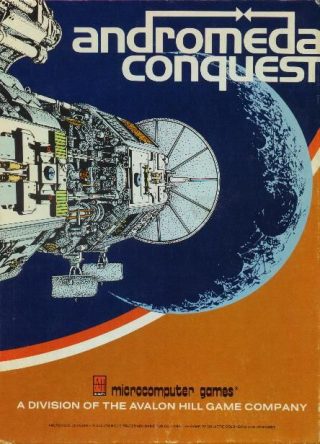