In Android Assault an alien species called the Xias have targeted human beings for extermination.

They have assembled a massive fleet that has crushed any opposing ship that has been sent their way and has started to attacking colonies stationed on nearby planets with a collision course to Earth and it is up to the player to stop them.

The gameplay is a side-scrolling shooter, similar to R-Type, where the player takes control of a space fighter that can morph into a cyborg called Bari-Arm and has an arsenal of weaponry to take down enemy ships including the Thundercracker, Burning Wave and the Chase Cannon along with picking up health and power-ups left behind by destroyed enemies.

There are several stages ranging from asteroid belts, planet surfaces, underwater and finally the alien mothership with each stage containing an enormous boss the player must defeat to advance to the next level.

There are also animated cut scenes that tell the story of Bari-Arm. 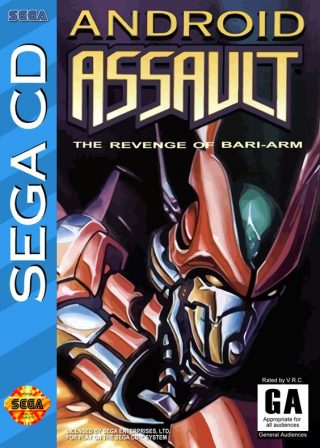