Altered Destiny is a game developed by Accolade in 1990.

P. J. Barrett, an ordinary human being who lives on planet Earth, goes to a workshop to repair his television. When he returns he realizes that he accidentally took the wrong one.

In theory it shouldn’t be a big deal, but it’s actually the other way around.

When the unsuspecting Mr. Barrett returns home and turns on the TV, he is sucked into a portal. A moment later he finds himself on the strange planet of Daltere.

This planet needs a savior as the evil alien Helmar stole an artifact known as the Jewel of Light, thus endangering the entire galaxy.

The unlikely hero must now overcome various obstacles and save the world.

Altered Destiny is a puzzle adventure game. The interface is very similar to that used in Les Manley games developed for the same company. Navigation takes place with the point and click system, but the game still requires text entry to send commands to the hero and to interact with the world. 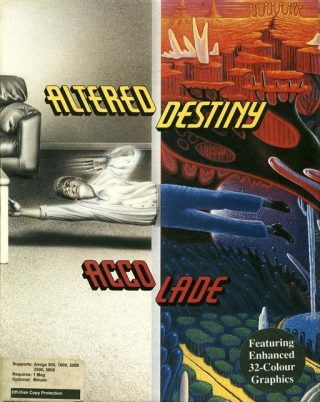 Dangerous Streets is a colorful sprite-based fighting game in the vein of Street Fighter II. Its ...