Alpha Mission II provides a game system similar to that of the predecessor, being both inspired by Xevious.

As in Alpha Mission, the main feature of the game is the absence of the classic bomb that destroys all the enemies present on the screen in favor of the presence of “armor”, ie the appendix parts that connect to the player’s spaceship and equipped with weapons highly destructive.

The weapons of the armor have a limited use linked to a bar on the side of the player’s screen, which is decreasing as the player uses special weapons or if the player is hit.

In fact the further function of the armor is precisely to protect the spaceship.

At the beginning of the game it is possible to choose one of two ways of configuring the keys: with “Type A” you use the first button to fire lasers and missiles simultaneously or to confirm the selection of one of the available armor, with the second button you use the particular armor weapon that is being mounted at that moment and with the third button the armor menu available is opened / closed;

With “Type B” the first button is used to fire lasers or to confirm the menu armor, the second button to fire missiles and the third button to open / close the armor menu.

During the game it is possible to destroy harmless drones, both flying and on the surface, which release bonuses.

Flying drones generally release power-ups that scroll down and that can be hit by the player’s laser to bring them back up and change their type; generally they release bonuses identified by the letters “S” (increases the speed of the spaceship), “L” (increases the quantity of laser fired), “M” (increases the quantity of missiles fired) or “G” (you get credits, useful at the end of the level to buy armor in a special shop), and sometimes release blue malus with their respective inverted letters, which cause a downgrade of the spaceship’s potential.

There are multiple bosses in each level.

At the end of each level you get additional credits based on the result. 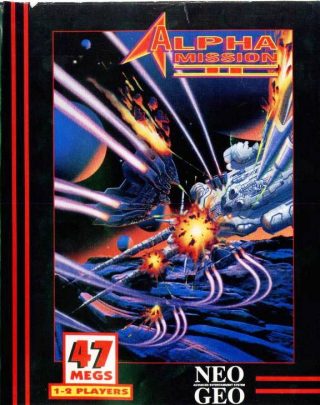 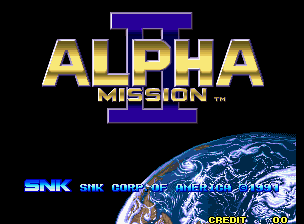 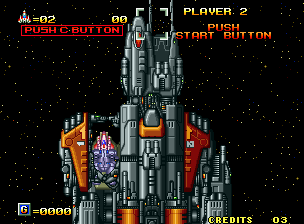 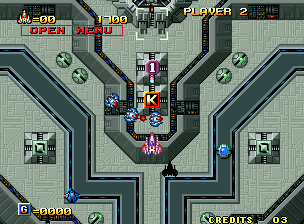 It's time again for the four warriors to gear up and head out on a new quest. Their mission this ...