Alone In The Dark is a game developed by Infogrames in 1992.

The player takes on the role of Edward Carnby, a private investigator, or Emily Hartwood, Jeremy’s grandson, and begins investigating suspicious death.

The three-story villa is reputed to be owned by the ghost of its eccentric owner.

Warped rats, zombies and giant worms are among the enemies that chase the character and from which you must somehow escape.

Alone in the Dark is an action-adventure-style survival horror game.

The action is viewed from fixed points of view. The backgrounds are 2D images, while the player-managed character, all objects and monsters are 3D models.

To escape from the villa it will be necessary to solve a series of puzzles that usually concern the search for an object and its use in an appropriate place. In addition to the objects needed for puzzles, it is also possible to find books and documents that can be read, curative objects that can be consumed to restore hit points and weapons.

Weapons are useful as the place is full of various types of monsters. Some can be killed with weapons, but others are impossible to kill and require a certain amount of strategies to bring them down. The quantity of ammunition is limited, therefore firearms must be used very carefully. 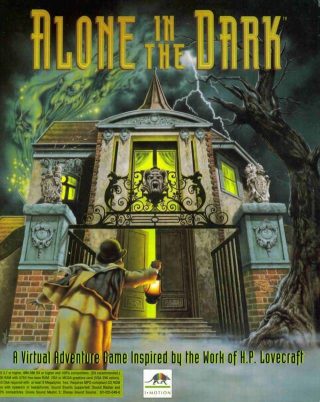