Adventure Island II is a game developed by Now Production in 1991.

In Adventure Island II the player plays the role of Master Higgins who will develop for his woman from the aliens who dominate the Earth.

The basic elements of the game are those of his predecessor Adventure Island: Master Higgins moves through the levels while fighting against various topics.

But untimely death results unless it has one of the various power-ups (such as weapons or a skateboard that increases speed).

He also needs to collect food to fill his bar of fame that steadily decreases; death is determined if zero is reached.

An addition are the dinosaurs that act as support and offer a different ability, such as flying or shooting fireballs.

First of all the level can choose the upgrades he wants to bring with him.

There are eight worlds with different themes, from a map with an aerial view. Sometimes there are different paths with other levels and end of a world. Master Higgins has to fight a boss. 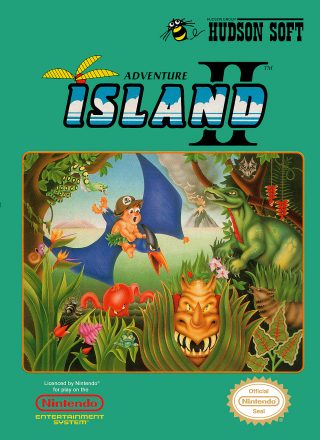