In the year 2500, humanity is attacked by the alien Gurzons. The Earth Defense Force doesn’t stand a chance, and whole cities are laid to waste by the evil invaders. There is still hope, however: enemies of the Gurzons from the planet Prism offer their help.

If just a few EDF pilots can make it to Prism, they will be provided with the ultimate weapon which may turn the tide: the A/X 101 system.

Controlling one of four starfighters launched on the mission, it is the player’s job to break the orbital blockade, make it to Prism and then take the fight to the enemy.

The game is an on-rails shooter, with gameplay seen from a first-person cockpit perspective.

The player’s ship moves automatically through pre-rendered space and planetary environments and only the targeting crosshair can be moved freely.

Laser Cannons and Fusion Warheads are available to hit the numerous enemies. Lasers have unlimited ammunition but need a few moments time to recharge.

The warheads function as smart bombs and clear the screen of enemies, but are available only in limited supply. They are restocked when reaching a certain score. The ship’s energy shield functions as a life bar.

Between the shooting levels, there are transitional cutscenes, pre-rendered in the same way as the actual gameplay. 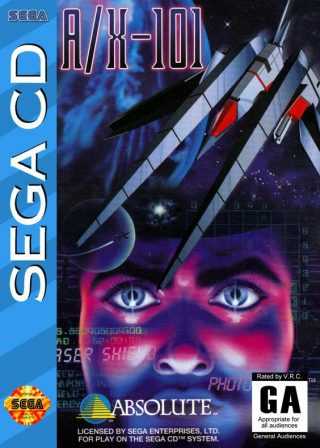