A Mind Forever Voyaging is a 1985 interactive game designed and created by Steve Meretzky and published by Infocom.

The name is taken from the third book of The Prelude by William Wordsworth.

Mind Forever Voyaging is not a conventional adventure, having only a single puzzle near the end of the game.

Unlike many other Infocom titles, especially those written by Steve Meretzky, the game has a serious tone and a political theme, attributes that the company would revisit with Trinity the following year.

The game is among Infocom’s most respected titles, although it has not been a commercial success.

It is also the first of the Interactive Fiction Plus line, which means that A Mind Forever Voyaging requires higher memory requirements, unlike previous Infocom games that use a less advanced version of the company’s Z-machine interpreter. 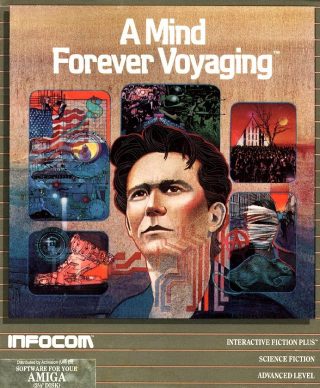